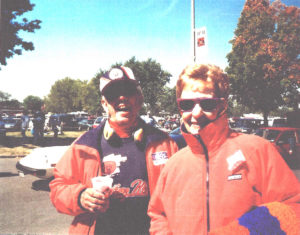 A few years ago, the topic of conversation among family members was Dad’s approaching retirement. Dad always has supported his three children’s dreams and ambitions, and we wanted to be there for him as he made important decisions about the retirement years ahead.

Dad always has been active, so we began by thinking of some of the activities he enjoys. He is an avid golfer, and he bowls once a week. He loves baseball and occasionally throws a fishing line out into the lake. He and Mom are also walkers, and they walked long before it became fashionable to do so. It has amused us that Dad never comes home empty-handed from those walks. He is constantly picking up sticks and twigs and bringing them home to use as kindling in their big old wood-burning fireplace. You can hear that fire crackling even on a summer’s morning when Dad will tell you that he’s just getting the chill out of the air, or on a summer’s evening when the night air is as cool as the day has been hot.

With this in mind, someone suggested that Dad could make walking sticks. He liked the idea, and since his name is Mick, his business could be called “Mick’s Sticks.” It wasn’t long before he set up shop in the basement at home. But fumes from the varnish Dad uses to seal the wood soon had the whole house smelling like paint thinner. His business partner, his Mom, suggested he move his stick business to the old garage out back.

A few years later, it’s a predictable sight to stop by and see him at work on his sticks in that little one-car garage with the gravel floor. The garage smells of musty wood, and of fresh-cut grass that still clings to the wheels of the lawnmower after a recent mowing. Sticks line the inside walls of the garage in various stages of their development. Some stand ready for debarking, others have been sanded with coarse or fine-textured sandpaper, and still more stand off by themselves until the wet, sticky varnish dries.

Dad’s workstation is a worn-out lawn chair; his business attire, an Illini cap, and an old cobbler’s apron…even though a bright, new red apron with a caricature of a Mick’s Stick hangs on a nail nearby. His workbench is a little wooden table from a child’s playroom of long ago, ready with swatches of sandpaper, paint brushes and small containers of polyurethane.

Dad’s thick, white, wavy hair stands out as he bends over his work. He may be debarking a stick by hand or sanding it just so, or methodically sealing the wood with one last coat of sticky varnish.

Watching his hands at work, I remember thinking as a little girl that Dad had the biggest veins popping out on the backs of his hands when he put a worm on my fishing hook or wrapped his big hands around mine to show me how to swing a bat. It’s a comfortable sight to see those same strong hands crafting these sticks.

And all the time he works, he whistles. He whistles familiar tunes played on a portable, paint-splattered radio he keeps by his side. As I was growing up, whenever I wanted to know where Dad was, I would stop, stand still, and listen for his whistle. And now that I’m grown with a family of my own, it’s nice to feel I’ll always know where my dad is. I’ll lean on my Mick’s Stick for support…and listen.

Happy Father’s Day to all dads who have given their own special memories to their children.