Most of us are familiar with the term “grandfathered in” that indicates an exemption from some new rule or law that has been enacted. Merriam-Webster defines the grandfather clause:

“Law: a part of a law which says that the law does not apply to certain people and things because of conditions that existed before the law was passed”

But where does this term come from? And does it really matter who your grandfather is, or was?

Not long before the mid-term elections, we found this intriguing article written in 1914 by the former Director of the Census, E. Dana Durand.

In this excerpt, Durand looks at census data to explain who the American voter is. He begins with a general introduction to voter requirements and how individual states in various regions of the country determine who can vote. Durand observes that in the North and the West, the number of eligible voters is about the same as the number of adult males, or—where women can vote—the combined number of adult males and females.

However, the South is an entirely different story.

Durand is blunt about what has happened to voter rights in the South:

There, within the past twenty years, eight of the states have passed constitutional amendments with the more or less avowed purpose of excluding negroes, as far as possible, from the polls.

Literacy tests have been imposed, with an alternative property qualification in some of the states. According to the last census, one-third of the adult male negroes of the United States were unable to read and write. As a matter of fact, although a considerable proportion of the negroes could meet these legal requirements for the ballot, very few of them, except in the border states, actually attempt to vote.

These new voter suppression laws had an unintended consequence—they also disenfranchised a number of poor whites living in the South. How to keep blacks from voting, while giving disadvantaged whites access to the polls? The answer was the creation of the “grandfather clause.”

Excerpt from “The American Voter,” by E. Dana Durand, formerly Director of the Census, The Youth’s Companion October 8, 1914, pp. 519-520
Read the Complete Article

How many voters are there in the United States? The question seems simple enough. In reality, no one can answer it with any accuracy. It is impossible to determine precisely what effect the various state constitutions and laws that prescribe the qualifications for the ballot have on the number of voters.

In many states, to be sure, the number of persons entitled to vote can be ascertained closely. In a large proportion of the states of the North and West there is either what is ordinarily called universal manhood suffrage or universal suffrage for both men and women. In those states the only persons excluded from the polls at general elections are criminals, insane persons and [the intellectually disabled], paupers (in some cases), and aliens.

Of course a certain length of residence is required before a person can vote in a given state or locality, and a good many people—perhaps a slightly increasing proportion—are temporarily shut out by change of abode; that, however, can scarcely be considered a restriction of the ballot.

THE TEST OF THE VOTER.

So liberal, indeed, are some of the states that they give the vote to foreigners who have declared their intention of becoming citizens, and who have resided in the country or in the state a comparatively short time—a year in most cases. The wisdom of that policy may well be questioned; however, the states that permit foreigners to vote are fewer than formerly, and, as a matter of fact, they have received comparatively few of the immigrants of recent years. Consequently, the aliens who vote are now few.

There are some Northern and Western States that impose educational tests for the suffrage. That is the case in Delaware, Wyoming, California, Washington, and in all the New England States except Vermont and Rhode Island. Usually, all that is required is the ability to read and write, and since the number of illiterates among the native or naturalized adults of these states is small,—it seldom exceeds two or three per cent,—these restrictions do not greatly reduce the number of voters.

When the United States was first established as a nation, virtually every state had a property qualification for the suffrage. Gradually, most of the states abolished that requirement. At present, no state outside the South requires a person to own property in order to vote for pubic officers. In many of the states only property owners are entitled to vote on questions regarding taxation, pubic expenditures, or bond issues. Some states also provide that anyone who fails to pay property or other taxes shall be excluded from the suffrage.

In the Northern and the Western States, therefore, the number of persons entitled to vote is not very much less than the number of men—or of both men and women, as the case may be—of adult age, excluding aliens. Quite different is the situation in the South. There, within the past twenty years, eight of the states have passed constitutional amendments with the more or less avowed purpose of excluding negroes, as far as possible, from the polls. Literacy tests have been imposed, with an alternative property qualification in some of the states. According to the last census, one-third of the adult male negroes of the United States were unable to read and write. As a matter of fact, although a considerable proportion of the negroes could meet these legal requirements for the ballot, very few of them, except in the border states, actually attempt to vote.

These Southern restrictions on the ballot exclude also some whites from voting. In some of the states, however, the larger proportion of the whites have been exempted from the restrictions by what is popularly called the “grandfather clause.” That clause provides that those who had the ballot at the close of the Civil War, and their descendants,—if they were old enough to vote, and were duly registered at the time the restrictive provisions went into operation,—need not pass the tests required of others.

Everyone is familiar with the Fourteenth and Fifteenth Amendments to the Constitution, passed shortly after the Civil War, and designed to obtain the ballot for the negro. The Fifteenth Amendment prohibited any discrimination on account of race. The question whether the grandfather clause conflicts with it has never yet come squarely before the Federal courts. The Fourteenth Amendment provides that any state that restricts the suffrage of adult male citizens of the United States, except on the ground of rebellion or crime, should be deprived of a proportion of its representation in Congress and in the electoral college for the choice of President and Vice President. That provision, if enforced, would mean the reduction of the representation not only of most of the Southern States, but also of several Northern and Western States that limit the suffrage in a less marked degree.

No attempt, however, has ever been made to enforce that provision of the Constitution. Very elaborate machinery, which at best would be uncertain, would be necessary for doing so. How would anyone ever go to work to determine the number of persons who are denied the ballot? The census in its present form would throw virtually no light on the question. To frame census questions so as to bring out facts that would give conclusive evidence on the matter in hand would tax the wisdom of a Solomon; every census enumerator would have to be expert judge and an unbiased jury. The only possible procedure, in fact, would be through the courts; every person deprived of the ballot would have to prove his individual case in due form.

This article provides a fascinating glimpse into a time when the full impact of the Southern voter suppression laws had taken effect. In the article, Durand gives figures from the latest census, which would have been in 1910. This historical context is important. In 1910, ninety percent of African-Americans lived in the South, so these laws had produced an almost complete disenfranchisement of black voters. The legacy of slavery, when there were many laws expressly forbidding slaves from learning to read and write, is evident. A

lmost fifty years after the Emancipation Proclamation (1863) and the Thirteenth Amendment (1865) had ended slavery, in 1910 one-third of all adult African-American males still could not read or write.

It appears that Durand thinks that there is something fundamentally wrong with these laws that disenfranchise blacks. At the very least, the laws may not be constitutional. “Everyone is familiar with the Fourteenth and Fifteenth Amendments to the Constitution, passed shortly after the Civil War, and designed to obtain the ballot for the negro,” he says.

The Fourteenth Amendment, ratified in 1868, gave all citizens (born in the United States or naturalized) equal protection under the law, and it technically granted African-Americans the right to vote. It even set out penalties for states that tried to prevent citizens from voting—states could lose Representatives to Congress and even the number of electoral votes could be reduced! Then the Fifteenth Amendment, ratified in 1870, specifically defined the rights of black voters: 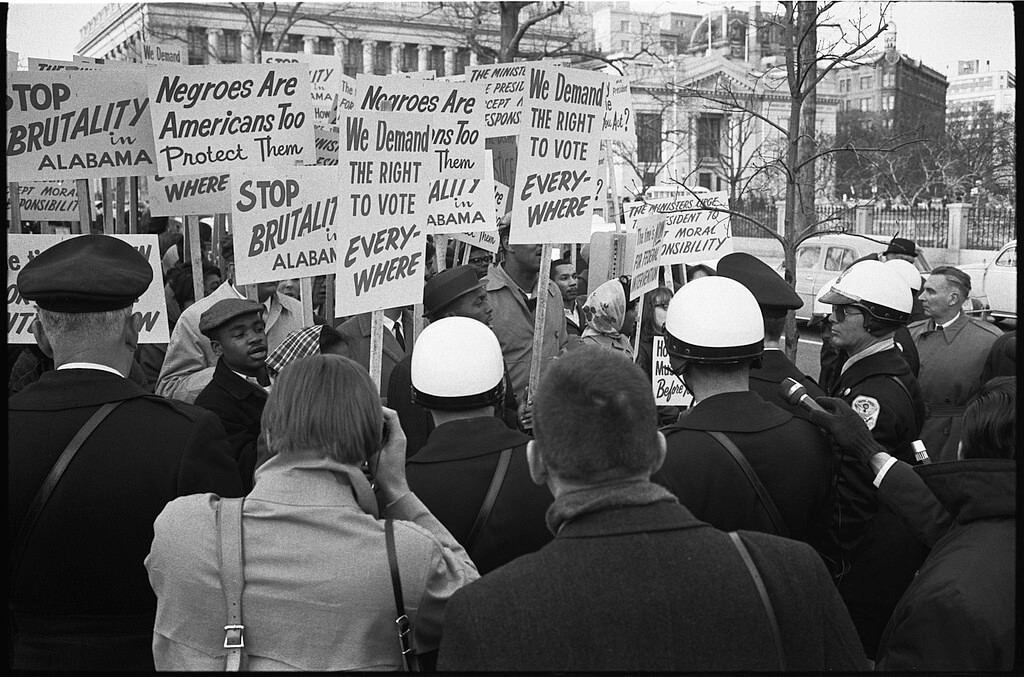 Durand then turns to the “grandfather clause.” Trying to exempt white voters from the Southern voter suppression laws had produced a truly twisted creation. In order to “grandfather in” white voters while excluding blacks, the lawmakers had to go back to a time when whites could vote, but blacks couldn’t. They had to go back to when a voter’s white ancestor, most likely a grandfather, could vote at the end of the Civil War, before the passage of the Fourteenth Amendment.

Whether the grandfather clause conflicts with the Fifteenth Amendment has “never yet come squarely before the Federal courts,” Durand says. He observes that up to 1914, the punitive provisions of the Fourteenth Amendment have never been imposed on states that have created voter suppression laws.

“No attempt,” he notes, “has ever been made to enforce that provision of the Constitution.” Incidentally, the grandfather clause was declared unconstitutional the following year, in 1915, but no penalties against Southern states were ever imposed. As a matter of fact, the Fourteenth Amendment provisions for reducing the number of Congressional Representatives or Electors have never been imposed.

Durand concludes that questions of whether individuals are being denied the right to vote will have to be decided in the courts. And history has proved him correct. The suppression of African-American voting rights remained legal and in effect until the Civil Rights legislation of the 1960s. It was a 100-year journey from the enactment of the Constitutional Amendments that freed the slaves and gave African-Americans the ballot, through the era of the grandfather clause and voter suppression laws, to the ultimate reinstatement of African-American voting rights in the 1960s. (See timeline below.)

Recently, some voting rights advocates have expressed concern that restrictive legislation may again be creeping into law, particularly in the South. For example, more stringent requirements for photo IDs have been enacted by some states, and this could adversely affect black voters. The percent of African-Americans who do not have a photo ID is significantly higher than the percent of whites who do not. Once again, it will ultimately be the courts that decide.

One thing is certain about the right to vote, however. It really shouldn’t matter who your grandfather is, or was.