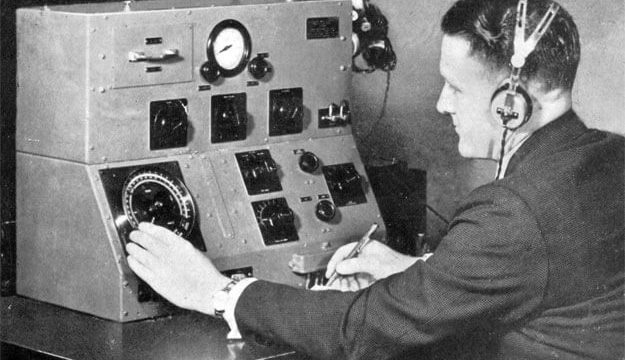 Now my husband George, who has a much (much!!!) better background in science than I do, was very excited to find this article from 100 years ago touting a new invention for ships that used the same scientific principles that enable modern GPS systems today.

The Marconi-Bellini-Tosi wireless direction finder enables the navigating officers of a ship to find her position even in the thickest weather without the aid of compass or sextant—that is, if the ship is within fifty miles of a wireless station, either on land, or on a ship the position of which is known. Moreover, if the ship receives a wireless distress signal, she can set her course toward the sending ship, even if the sending ship does not give her position. The direction finder has had a thorough test on the Canadian Northern steamship Royal George. Capt. F. J. Thompson, her commander, reports that the instrument was accurate to a degree in determining the compass direction. It showed, for example, the exact compass position of Cape Race, Cape Ray and Father Point, and verified wireless signal directions from several vessels, one sixty-eight miles distant. Captain Thomas believes that the direction finder will be very useful in fogs, and also in finding vessels that may send out distress signals.

George tried to explain “trilateration,” which I had never heard of and understood as “triangulation,” which did ring a distant bell—maybe from a geometry lesson long ago. (More likely it came from crime shows where the cops were trying to find a missing victim using his or her cell phone and triangulating cell phone towers.)

George explained that this wireless instrument was all on the ground, while GPS technology uses satellites, of course, but the idea is the same. I said I’d have to research how GPS works. George found me a physics website that had a link to another site that had a great explanation, complete with diagrams.

It turns out that triangulation measures angles to a spot from known points, while trilateration measures the distance to the point directly. Two Italian officers Bellini and Tosi invented this type of radio direction finder in the early 1900s, and their invention became known as a BTDF (Bellini Tosi Direction Finder).

The name Marconi was added in 1912 when they joined with the Marconi Company. Their wireless direction finder used antennae and rotating loops in a radio to measure the distance to a wireless station or another ship, as long as it was within fifty miles.

The technology evolved and similar devices were widely used from the 1920s until satellites took over in the 1980s. In fact, according to Wikipedia, some ships still have them today.

But I doubt Capt. Thomas could ever have imagined three or four thousand satellites overhead beaming down signals to the GPS function in our cell phones!

It reminds me of an outing on a pontoon boat last summer. Along with another couple, we headed out into the country to find the boat launch site, about 60 miles away from home. The boat company had a website and I dutifully copied down their directions, along with printing out what MapQuest had to offer (both map and directions), AND we programmed the GPS in our car, not to mention the capabilities of all our cell phones. Ever the pessimist, our friend brought his own portable GPS with him.

He plugged it into our cigarette lighter and turned on the voice guidance. Wouldn’t you know—his device wanted to send us on a route parallel to the one we were on!

It was too much technology. After about 15 minutes of my trying to give directions to my husband while my friend’s GPS nagged us about going the wrong way (and he refused to silence “her”), I pulled the plug. We found our way to the dock and home again, and the friendship even survived!