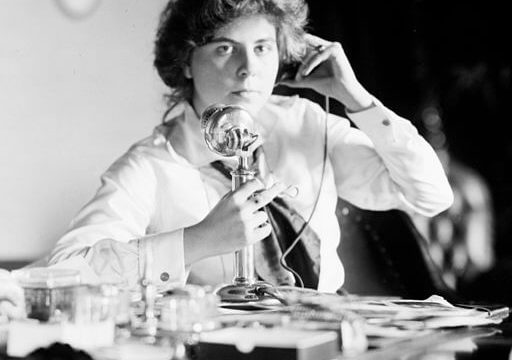 With elections coming, there is a lot of talk about the women’s vote and how to secure it. One party claims that the other party is waging a war on women and that women had better vote with them or face dire consequences. The other party cries “foul” and looks for ways to reassure women that they are the party that truly has women’s most important interests at heart.

Trying to persuade women how best to cast their ballots has been going on for a long time. Here’s a story about a husband’s effort to direct his wife and daughters how to vote 100 years ago:

An Eastern man, who a few years ago moved his business and family to a Western state, recently told an amusing story against himself to a visiting friend.

He is of a decidedly conservative temperament, and before long found himself engaged actively in politics, especially in opposition to woman suffrage; which, however, much to his disgust, his new state adopted. His wife and daughters, who had always passively accepted his views, also lamented their new privilege, which, in deference to the feelings and convictions of the head of the family, they did not at first intend to exercise.

It was he who finally urged them to do so, pocketing his prejudices at the crisis of a close election, when five possible votes for his candidate seemed too valuable to lose. Again his womenfolk meekly acquiesced.

“Only you must explain things, John, and tell us all about principles, and platforms, and candidates, and all the rest of it,” his wife stipulated, with a sigh. “When we could simply say we took no interest in politics, that was enough; but if we’re actually to be in politics, we mustn’t seem stupid when people talk about them.”

“Of course, of course!” John assented, easily. He proceeded to explain, and found his audience so flatteringly attentive that he soon fell into the way of pouring out his political news, views, and emotions at home with fervor and frequency. When election day arrived, the women were ready for it, and he proudly shepherded his timorous flock to the polls.

His candidate was badly defeated. Glancing up suddenly from the morning paper the next day, as he was reading aloud the melancholy details, he was startled to encounter four pairs of eyes gleaming with triumph, while the mirror opposite showed his youngest daughter dancing a victorious pas seul behind his back, and surreptitiously waving aloft her napkin like a banner. Inquiry soon resulted in a full confession: they had all voted the other way!

“If only you’d given me an inkling you had doubts, I’m sure I could have convinced you,” protested the dazed politician.

“You did convince us, dear, explained his wife, “and we hadn’t any doubts. Only you convinced us against your man.”

“I could have brought you literature—“

“As if anyone else’s arguments could make us want to vote for Mr. Blank if yours couldn’t!” she cried, indignantly.

“But, at least, why didn’t you tell me how you were going to vote?” he demanded.

“Why, you always said, when you objected to women’s voting, that their votes wouldn’t mean anything if they echoed their men, and would make dissension and disaster in the family if they didn’t. We didn’t really think so; but it seemed just faintly, very remotely, possible you might be right. And of course we didn’t want trouble. Now we know you weren’t right,” she concluded, sweetly, “we’ll outvote you next time quite frankly, five to one.”

There was nothing to do but surrender, gracefully, and he did it.

“The next time we are on opposite sides of the question, Margaret,” he said, “you and I won’t vote at all. We’ll pair, and sit cozily at home by the fireside, I with my newspaper and you with your sewing; and the girls will have to go out and do all the voting for the family.”

This is such a great snapshot of family relationships in 1914. Can’t you just see that youngest daughter gleefully doing a victory dance behind her father, waving her napkin banner over her head? The father is identified as “the head of the family,” but he is outsmarted by his wife and daughters and ends up “with nothing to do but surrender.”

This is also an interesting snapshot of the United States in transition—from banning women from voting to enabling them. This article was published in 1914 before the Nineteenth Amendment became law in 1920 and gave all American women the right to vote. I was at first puzzled by the fact that the family had moved from an eastern state to a western state that then adopted women’s suffrage; I didn’t know that some states, particularly western states, had already passed laws allowing women to vote.

In fact, by the end of 1914, eleven states—all in the West—had enacted such laws. But there was still opposition, particularly in the South and the East. The wife notes two of the arguments against suffrage that her husband, who opposed it, had used: women’s votes wouldn’t mean anything if they voted the same way as their husbands, and it would cause “dissention and disaster in the family” if they didn’t. 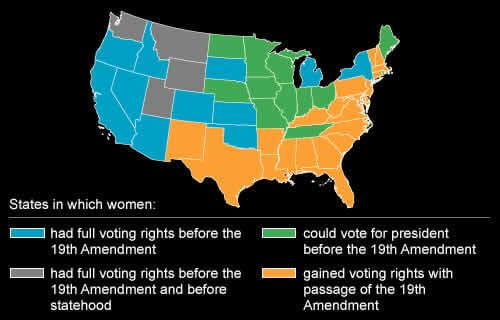 The Nineteenth Amendment reads, “The right of citizens of the United States to vote shall not be denied or abridged by the United States or by any State on account of sex.” States are specifically mentioned because the Constitutional Convention of 1787 gave states the right to determine who would be qualified to vote. Surprisingly, states began to revoke women’s right to vote the year after the Declaration of Independence was signed in 1776, and by 1807 women had lost their voting rights in all of the states.

The women’s suffrage movement began in the United States in 1848, led by Elizabeth Cady Stanton and Susan B. Anthony, among others. After the Civil War, female reformers realized they would have to be able to vote in order to be taken seriously. Some concentrated on lobbying Congress and the president for passage of a constitutional amendment, while others focused on winning the right to vote at the state and local level. It was a gradual victory that took another 50 years to accomplish, culminating in the ratification of the Nineteenth Amendment.

So what effect do women voters have today? Well, since 1980 a larger proportion of women have voted in presidential elections than the proportion of men eligible to vote. And looking at the total numbers of voters, there are more women who usually vote than men. In the 2012 election, ten million more women voted than men, and they voted for Obama, not Romney. They were a deciding factor in Obama’s victory; women pushed him over the top.

No wonder the women’s vote is so important!!