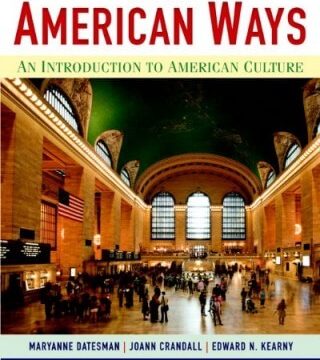 Maryanne Datesman gives an overview of the Vintage American Ways website and shares her experience writing American Ways: An Introduction to American Culture with her two co-authors.

She explains the unique paradigm of six basic American cultural values they introduced and developed in the book.

WITH MARYANNE DATESMAN, THE FOUNDER OF VINTAGE AMERICAN WAYS.

MARYANNE, AS THE LEAD AUTHOR OF AMERICAN WAYS, CAN YOU TELL US FIRST ABOUT THE BOOK AND ALSO HOW IT INFLUENCED THE CREATION OF THIS SITE?

MARYANNE: Well, thirty years ago, I co-authored this book for foreign students about American values. Now these are American Cultural Values—American ways and introduction to American Culture, and my two co-authors were a Professor of American Studies and a woman who is a sociolinguist and she has a degree in cross-cultural communication. So it’s really a three part effort and as part of that primarily from Ned Kearny who was the person, who was a Political Scientist, we came up with a paradigm of Six Values and this looks at how our country was formed, how the values came to be and how they affect us now.

When we first wrote this, I remember we got the contract and I stared at the yellow pad and I thought, “Oh my gosh! How are we ever going to explain what the American values are?” And over a period of time, to our astonishment, people seemed to think, “Yeah, these are the values.” The book’s been used all over the world, and now it’s in its fourth edition.

So this paradigm that Ned Kearny came up with has really stood the test of time and so recently I looked at the American values and what’s happening to our country and thought we really ought to have a dialogue about some of these values and so that’s why I thought we decided to start the Vintage American Ways website. And the six values are three reasons why people have come and still traditionally come to the United States and these are benefits that we get. The first thing is freedom, and the price for freedom is self-reliance, because if you can’t really be independent and self-reliant, you can’t be truly free. The second one is the equality of opportunity. But, if everyone has an equal chance for success, then you have to compete through competition, and the third one is living the American Dream—a good life–and the price for that is hard work. So over the last thirty years, it looks to me like there is no question about the benefits that people really would say that these are really the American values—freedom, equality of opportunity, and the American dream, but the other side of the equation—self-reliance, competition, and hard work—it may be that there’s some change in the way people value those three.

OKAY MARYANNE, YOU HAVE TALKED TO US A LITTLE BIT ABOUT ONE OF YOUR CO-AUTHORS. CAN YOU TELL US ABOUT THE OTHER?

MARYANNE: Yes, the other one a wonderful, fascinating person. Her name is Joann Crandall and she goes by Jodi. And Jodi is really a superstar in the field of English as a second language and she literally travels all over the world and consults with, um, foreign governments and so forth about their language learning programs. So the book, if it hadn’t been for the three different perspectives of the ESL and Jodi is also from the field of ESL…
ENGLISH AS A SECOND LANGUAGE…

MARYANNE: and the American studies and the cross-cultural communication, it wouldn’t have turned out as it is.

IN TALKING ABOUT THE CHALLENGING ISSUES WE HAVE TODAY, HOW CAN WE BETTER UNDERSTAND THE VALUES AND THEIR IMPACT ON TODAY’S WORLD?

MARYANNE: Well, what we want to do with this site is help Americans become aware of what these cultural values are, and so I would explain it this way. Most people don’t know what their cultural values are. I mean, they know their moral values or their personal values or whatever. But the values of the culture are largely unconscious. So these are what has allowed the United States to become a country that can take in immigrants literally from all over the world with all kinds of ideas, values, customs and whatever, and make them into Americans. Make them into one people and create a national identity, and it’s really quite a remarkable thing if you think about it. How have we been able to do that?

We believe that these Six Values really are the cultural engine of the United States, and in addition to being the engine of what drives us to be able to assimilate all these different cultures, you could also think of them as a fabric—that these Six Values are woven together. So, it’s not just the values one by one. It’s their relationship with each other so that if you start to pull one of the threads out, the whole fabric is affected. So if you try to have American values without self-reliance, you start to have a problem. If you pull out the American dream, you start to have a problem. In fact, today there is a lot of talk about whether the American dream is possible for most people anymore.

SO WHAT YOU ARE SAYING IS THAT THE WHOLE IS GREATER THAN THE SUM OF ITS PARTS?

MARYANNE: Yes, it really is. So the Six Values together are a paradigm, a system of values and I think that is what is unique about what we are offering in this website is an understanding of how these Six Values are critical to the functioning and continuing of our country.