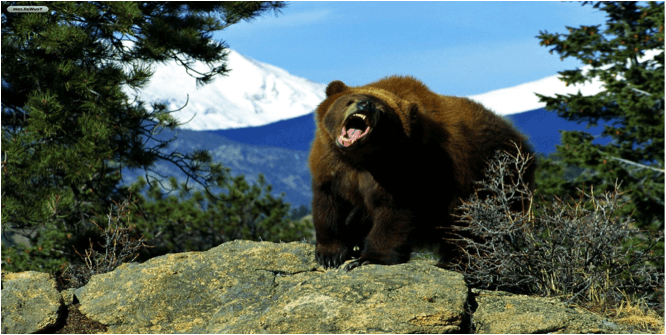 If you know a twelve-year-old boy whose idea of adventure is playing video games on his cell phone, share this story with him. Ask him if he’d like to trade places with this boy “born and bred in the wilderness.”

The state of Montana used to have so many bears that there was hardly a man who had not at least a few bears to his credit. One man in the Gallatin valley killed more than four hundred bears in his lifetime. Another, Jack Bean, a professional hunter, killed more than two hundred—and was himself crushed and bitten almost to death by a big grizzly he had trapped down in Wyoming. One bear, long known as the “Terror of the Spanish Peaks,” weighed fifteen hundred pounds when he was finally shot, and had claws nine inches long.

But of all the bear stories that still circulate in the Gallatin valley, the best is that of George Anderson and the big Cimarron Creek grizzly.

Young Anderson was born and bred in the wilderness. He had a little 22-caliber rifle,—in a day when such weapons were not so powerful or accurate as they are to-day,—and with that he used to roam the mountains in search of game.

One day, when he was twelve years old, he went up Cimarron Creek with a smaller boy. They caught some trout, shot a pheasant out of a tree, and had a good camp dinner. After dinner was over, the younger boy went to get a can of water from the spring near by. In a moment he came rushing back; his face was white and his eyes were starting from their sockets.

“A bear!” he cried; “an old bald-face grizzly right down at the spring! And he growled at me!” Then he fell to shivering so that he could hardly stand.

George sprang up and seized his rifle. “Here, climb up on that rock, where he can’t get you!” he shouted. He pointed to some jagged, splintered pinnacles of rock that stuck up near by. No bear could climb up as far as an agile boy could do. “I’m going to shoot that bear,” George announced. “Maybe I’ll have to run a little, but you get ready to throw rocks at him when I tell you to.” And he started down to the creek.

He had not gone ten steps when the bear met him. George took quick aim, and fired. The little bullet only stung old bald face into a vicious temper. George sprang for the rocks, and squeezed himself through a crevice that was just wide enough to admit his slender body. The rocks stood in a series of irregular, jagged columns, almost like a picket fence—the broken fragments of a great reef that had separated into isolated, comb-like fragments.

The bear, growling furiously, plunged at the crevice. He could not get through. The boy reloaded his little weapon, and fired another shot point-blank in the animal’s face. The bear roared, and lunged again into the crevice after his elusive enemy. Finding that he could not get through, he drew back, and with incredible agility, he rushed to the next crevice, only a few feet away, and sprang through.

He almost caught the boy, who was reloading his weapon. Only a desperate leap saved George; and he left his gun behind. The bear seized it, and bit the stock in two. Then he darted back for the crevice through which he had come to try to catch the boy on the other side.

As the bear rushed round the pinnacle, George stepped back through the smaller crevice. He could keep this up indefinitely, for he had to move not more than ten or twelve feet each time, whereas the bear had to go perhaps seventy-five feet in all, and turn a sharp corner.

Meantime, the smaller boy on top of the pinnacle began to throw rocks down on the bear. He had not much strength, but some of the missiles hurt. The diversion gave George time to reload the broken rifle; and the next time the bear came to the crevice after him, he fired the weapon down the bear’s throat.

It was a lucky shot, for the bear began to cough and to bleed profusely. But the battle was by no means over. Time after time the bear raced round the big rock, while the boy slipped through the short way to safety. Every minute or two George had a chance to reload the broken, stockless rifle, and give the bear a stinging shot in return. Finally, he hit the bear in the eye. That crazed the grizzly; he charged aimlessly, for he had lost the power to guide his rage effectively. Another shot took effect in the other eye—and the battle was over. The big bear was not dead, but he lay gasping. George advanced cautiously, put the loaded gun against the bear’s neck and pulled the trigger. It was a fortunate shot; the bullet found a vital place in the spine, and the bear, with a shudder, straightened out and breathed his last.

This is a good story. It has so many elements that appeal to Americans—the love of the West, the importance of guns for defense, the bravery of a boy, the “can-do” spirit, even our values of self-reliance and rugged individualism. Here is a true American hero—a boy who is “born and bred in the wilderness,” who “roams the mountains in search of game,” armed only with a “little 22-callibre rifle,—in a day when such weapons were neither so powerful or accurate as they are to-day,” that is in 1914.

The year 1914 is significant here. First of all, Montana had only been a state for 25 years—since November 8, 1889. And second, 1914 is just 24 years after the closing of the frontier in 1890, a fact I learned in school many years ago. Did you ever wonder why it was that the frontier was “closed” in 1890? Well, it happened because the Superintendent of the Census declared it so.

The US Government Census site explains:

In 1890, the Superintendent of the Census described the western part of the country as having so many pockets of settled area that a frontier line could no longer be said to exist. The advance of the frontier line that characterized shifts in population distribution for the previous 100 years was complete.

So returning to our story, when it was published frontier life was still fresh in people’s memories. The ideals of rugged individualism and self-reliance were alive and well. Indeed, this story implicitly reinforces these values.

Here is a twelve-year-old boy out with another child who is even younger, catching trout and shooting a pheasant out of a tree, and then cooking the fish and game for dinner over a campfire. How is that, for self-reliance and the “can-do” spirit? Not to mention killing the big Cimarron Creek grizzly bear!

The writer tells us that Montana used to have so many bears that most men had killed more than one of them; some men had killed hundreds of them in their lifetime. However, he stresses the importance of this story, “But of all the bear stories that still circulate in the Gallatin valley, the best is that of George Anderson and the big Cimarron Creek grizzly.”

Why is this so?

Perhaps it is precisely because this story reinforces our values of self-reliance and independence. But it also raises an important question—where are these boys’ parents?

Why are they allowing these children to roam around outside without parental supervision? And with a gun! Today, no self-respecting helicopter parent would ever allow such a scenario, would they?

Far safer to let our children live their adventures on electronic devices. Even though today the predators we want to protect our children from are generally not bears.

But are we teaching our children to be self-reliant and independent? And is this still important? Consider this: If they do not become self-reliant adults, they will never be truly free.

These are two of our fundamental American cultural values—individual freedom and self-reliance. Freedom is probably our most basic and most important value.

But if we are dependent on someone else, we cannot be completely free. Self-reliance is the price we pay for having true freedom.

The question is, Are these two values still important enough to teach them to our children? And if they are, how do we do it, and still keep them safe?

Don’t miss this “Data Visualization Gallery” on the US Census website. This series of maps highlights population expansion into new territory, subsequent gains in population density, and increasing urbanization.