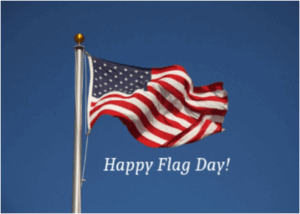 Today is Flag Day, created by a proclamation of President Woodrow Wilson on May 30, 1916.

The date of June 14th was chosen as Flag Day in remembrance of the June 14, 1777 day when the flag became a symbol of the new nation.

Wilson proclaimed:
It is the anniversary of the day upon which the flag of the United States was adopted by the Congress as the emblem of the Union.
The President urged that Americans rededicate themselves to the United States as “one and inseparable.”
On that day, we should stand with united hearts and remember our forefathers’ vows of independence, liberty, and right, Wilson stated.

Of course, you know that the red and white stripes stand for the original 13 colonies, and the 50 stars stand for the 50 states. Here’s a link to a site that has suggested assigning a state to each star, in the order the state joined the union.

It’s not official, but it might be fun to imagine which star is your state.