October 9, 2017—an official holiday in the United States: Columbus Day. What does Christopher Columbus have to do with the Pledge of Allegiance?

There’s a lot of controversy about what kind of a person Christopher Columbus really was and whether he should have a special day, but we’re not going to get into that. 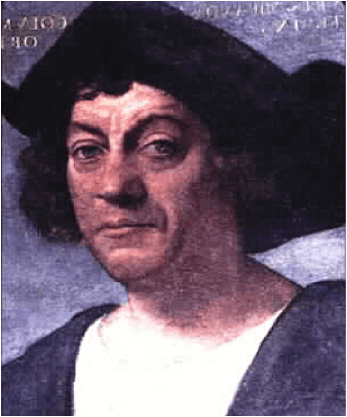 If you are of a certain age, you learned a little rhyme, a mnemonic device to remember that date in history:

Columbus Day has been around for a long time.

Did you know that 2017 is the 125th anniversary of Columbus Day as an official holiday?

And it’s also the 125th anniversary of the Pledge of Allegiance?

How in the world are they related?

They were both created by Francis Bellamy and James Upham who were working for a popular magazine called The Youth’s Companion.

A Call to Patriotism 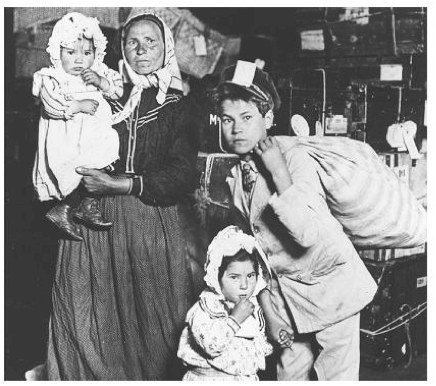 By 1890, the United States was experiencing a tidal wave of immigration.

The public schools in New York City had more immigrant children enrolled than children born in the United States.

How would these students from so many different countries become “Americans”?

James Upham, a Youth’s Companion employee, was convinced that these students needed something tangible to symbolize the United States and inspire love of country in all the children, native as well as immigrant.

Upham fervently believed that the American flag was the answer—if there were a flag in every schoolhouse the children would see it every day and realize that they were all part of this great country. 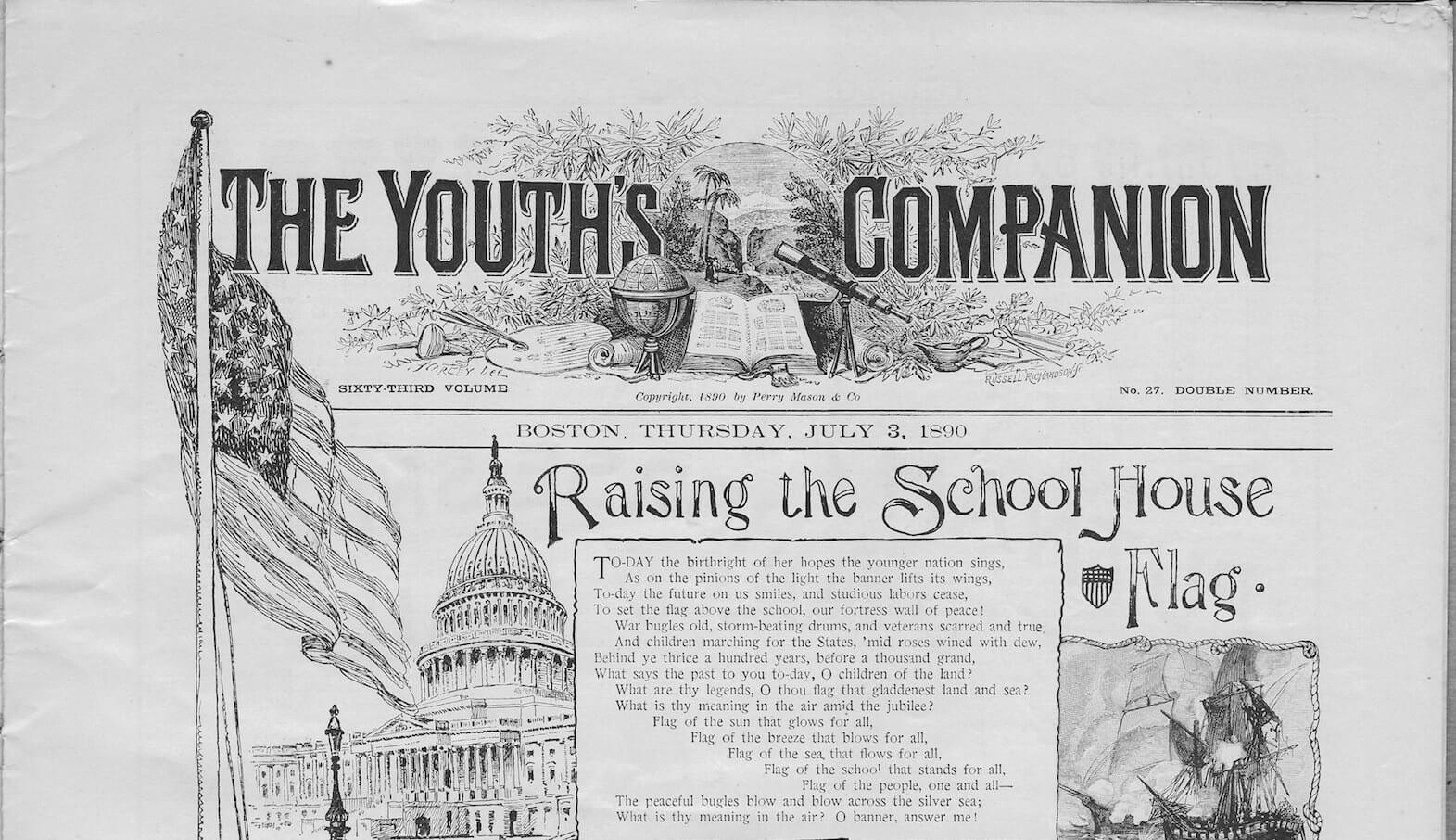 With the support of the owner of The Youth’s Companion, Daniel Ford, Upham organized a campaign called “Raise the Schoolhouse Flag.”

Francis Bellamy joined the staff of The Youth’s Companion in 1891, and in a year’s time, they placed flags in over 30,000 schools, from Maine to California!

Without the Internet or Social Media, how did they manage to do it?

Upham was a marketing genius.

He was in charge of promoting the circulation of The Youth’s Companion and part of his job was selling American flags, among other items.

Upham’s campaign began with an essay contest for students: “The Patriotic Influence of the American Flag.”

One winner was chosen from each state, and the student’s school was awarded a large flag.

Then the names of the winners and their schools were published in The Youth’s Companion.

After this launch, Upham wanted the students themselves to buy the flags for their schools. 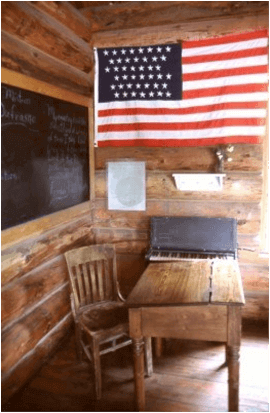 The Youth’s Companion sent out 100 free cards to each student who wished to obtain a school flag, printed with these words:

This Certificate entitles the holder to One Share in the patriotic influence of the School Flag.

The students sold the certificates for 10 cents each, and after selling 100 of them, they would send the money in to The Youth’s Companion and receive “a good-sized, substantial flag” to display at their school.

But Upham’s vision was much bigger; he wanted to engender students’ love of country with a special flag ceremony. He said,

A flag over every school to remind the children that they belong to the nation as well as the town.

Then, the children every day uniting before the flag in patriotic exercises which will stir up their love of country.

Upham set his sights on creating a patriotic flag ceremony in conjunction with the Chicago World’s Fair. 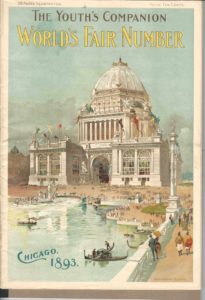 In anticipation of the 400th anniversary of Columbus’ historic arrival, Chicago planned a huge World’s Fair, also known as the Columbian Exposition.

Forty-six countries from all over the world were sending exhibitions.

“The White City” was going to be built in Chicago, with electric streetlights illuminating buildings covered by white stucco.

The undertaking was so ambitious and complicated that the organizers realized it wouldn’t be ready in 1892.

So they planned a dedication ceremony for October 21st that year.

The Columbian Exposition officially opened May 1, 1893.

This was a big deal.

People from all over the world would come there—nearly 26,000,000 visitors in the six months it was open.

A Columbus Day Flag Celebration in every town

Upham argued that most Americans would not be able to go to Chicago to be part of this great event in honor of Columbus, but they could participate in celebrations planned in their local towns.

He proposed that these local celebrations be centered in the public schools, which he said were “the most representative and truly American institution we have.” 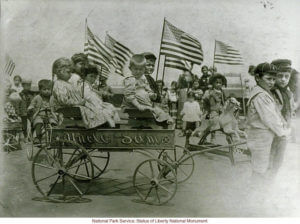 Wouldn’t it be a most tremendous lesson in patriotism if the school pupils should take over that celebration?

Let them make it a Flag Day.

Let them feel that that is their day, to show to the older folks that they are going to be patriots.

And so, with the help of Francis Bellamy and the support of The Youth’s Companion and others, in the space of less than a year, they were able to get Columbus Day declared a national holiday, and they wrote a ceremony to be used in public schools all over the United States.

On September 8, 1892, The Youth’s Companion published The Official Program for The National School Celebration of Columbus Day, planned for October 21, 1892.

The birth of the Pledge of Allegiance

Upham believed that the heart of the program “must be what the school children say in unison when the flag is raised.” He told Bellamy,

It must be a sort of pledge of allegiance to the flag.

It must be, in few words, a sentiment as big as the day itself.

It must be so fundamental, and so stirring, that it will live if possible long after this one occasion.

Francis Bellamy had been in charge of writing the National School Celebration Program, and he described the August night that Upham urged him to compose the Pledge.

Bellamy said that he reflected on American history and wondered how words could be found to express our important ideals. 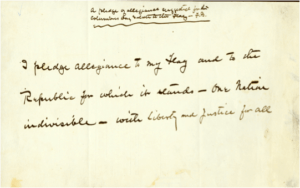 Here is what he wrote—the original twenty-three words of the Pledge of Allegiance:

I pledge allegiance to my Flag and to the Republic for which it stands—one nation indivisible—with Liberty and Justice for all.

Why did Bellamy choose these words? 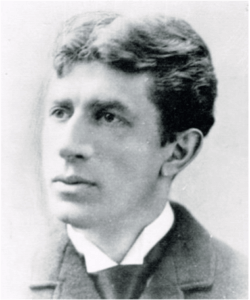 Here is his explanation:

Of course, start it with the main idea of the moment as the children stood at salute before the flag:

“I pledge allegiance to my flag,” (allegiance was the great word of the Civil War period).

But why allegiance to the flag?

Because the flag stands for the Republic.

And what does that vast thing, the Republic, mean?

It is the concise political word for the Nation, the One Nation which the Civil War was fought to prove.

To make that One Nation idea clearer, we must specify that it is indivisible, as Webster and Lincoln used to repeat in their great speeches.

No; that would be too fanciful, too many thousands of years off in realization.

But we as a nation do stand square on the doctrine of liberty and justice for all.

That’s all any one nation can handle.

So those words seemed the only roundup of past, present, and future. 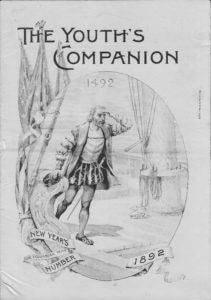 on the occasion of the 400th anniversary of Columbus’s voyage to the American hemisphere,

tens of thousands of school children all over the United States

recited the Pledge of Allegiance to the flag for the first time.

And that’s what Christopher Columbus has to do with the Pledge of Allegiance!