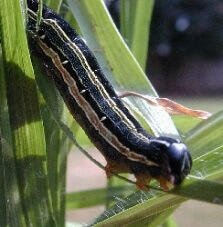 “Battling the Armyworm for 100 Years”

Last Saturday we were sitting around a fire pit in a friend’s yard, roasting marshmallows for s’mores, when the subject of lawns came up. Our friend said he was having trouble with armyworms eating his lawn. None of us, except my husband who grew up in Florida, had ever heard of them. Looking for an article from this week’s Youth’s Companion from 1914, we were surprised to discover this article on armyworms!

Several states have suffered considerably this summer from the depredations of the army worm, the naked larva, or caterpillar of the yellowish noctuid moth, Leucania unipuncta, a species closely related to the cutworms. The army worm is always present in the United States, but only occasionally becomes numerous enough to do much damage. As an injurious farm pest, it is confined to the region east of the Rocky Mountains, including Texas, and the states north of the Gulf tier. After an unusually dry spring, the worms sometimes increase so rapidly that they have to forage far afield for food. They then march in large companies, forming patches that are sometimes twelve or fourteen feet long and several inches wide, and that advance at a rate of a dozen or more rods a day, and devour nearly every growing thing in their path. They attack grass, garden vegetables, and grains, and leave little but stalks and the veins of leaves. The best way to fight the army worn is with a spray of Paris green or arsenate of lead, and by digging trenches across their line of march, and filling the trenches with oil or poisoned bran mash. The worm is about an inch and a half long, and has black, yellow and green stripes. The moth is a pale yellowish brown, with a white spot in each fore wing. The worm has a great number of natural enemies and parasites, that usually keep it within bounds.

I like the fact that these insects are called “armyworms” because they march in groups, destroy everything in sight, and then march on to their next conquest. These little varmints can reportedly destroy a 50-acre field or your lawn in 24 hours, according to experts.


And Americans care a lot about their lawns.

The lawn care industry is a multi-billion dollar business, and according to the National Gardening Association, 60 million Americans engage in some kind of do-it-yourself gardening or lawn care. 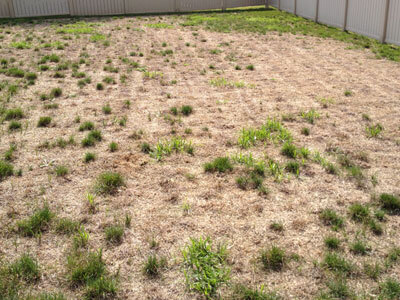 Others pay someone else a combined total of well over 15 billion dollars a year to have that beautifully manicured lawn. If you put all the American lawns together you would have an area about the size of the state of Virginia.

So it’s not surprising that an invasion of armyworms is cause for alarm.

And if you are unfortunate to have this army attack your lawn, just remember they are a formidable adversary. Americans have been battling them for over 100 years!!

Click here to read more about Americans and their love affair with their lawns.