This article was written in 1914, at the beginning of World War I.

News dispatches were describing battles taking place in Europe and there must have been some confusion about the names of these battles.

The author of this article is explaining why the same battle can have two different names, depending on who is describing the conflict.

Newspaper readers have noticed that in the dispatches different names are sometimes given to the same battle. For example, the dispatches from France spoke of the Battle of Haelen, whereas the German dispatches called the same engagement the Battle of Diest. That is not unusual; many of the world’s most famous battles have two names.

The reason for this is that the opposing armies always name the battle from some prominent geographical landmark, and as they look at the field from different points of view, they naturally settle on different names. Thus, at Waterloo, the battle took its English name from the little village where Wellington made his final headquarters, and whence he sent to England the first dispatch that announced his victory. So in 1866 the headquarters of the Prussian army was near the Village of Sadowa; whereas that of the Austrians was near the village of Königgrätz. At Gravelotte, the little village of that name was an important point in the German lines; on the side of the French, the hamlet of St. Privat was the key to their battle formation. As long as they held that, they were invincible; but when the Germans assailed it in the rear and drove them out, the day was lost.

In addition to European battles with two names, the writer says that the same phenomenon occurred in the American Civil War. Northerners and Southerners also have different names for the same battles. To drive his point home, he tells us that he knew all about the Battle of Sharpsburg but was twenty years old before he ever heard it referred to as the Battle of Antietam. The writer identifies himself as a Southerner whose father was a Confederate officer, giving him special credibility.

This article is about perspective. How you name a battle, how you view a conflict depends on your point of view. This has been driven home to me today in a conversation with my husband about what happened at the end of the Civil War. I grew up in the North, he grew up in the South, but his parents were Northerners. He lived in Florida but spent a lot of time visiting family in Pennsylvania. I lived in Pennsylvania and Maryland, a border state with significant differences between the northern and the southern parts of the state.

When I was eleven, we moved from Baltimore to La Plata, a small town in southern Maryland. I remember being surprised by two things. First, we had to say “yes, Sir and yes, M’am” to our teachers, and second, there was so much talk about the Civil War. It almost seemed like the war was still being fought. “Keep your Confederate money, boys—the South shall rise again,” they said with a laugh. You could even buy souvenirs adorned with this slogan.

For me, the Civil War was ancient history—something that happened a hundred years ago. My father’s family had been in northern Virginia since the late 1700s, living not far from Manassas, where the Battle of Bull Run took place, and Sharpsburg, the location of the Battle of Antietam. His father’s people were southern sympathizers and his mother’s people, who lived twenty miles away, were northern sympathizers. I remember my grandmother saying that when she and my grandfather decided to get married in 1903, her parents were very concerned about her marrying a man whose family were southern sympathizers. But the family Civil War stories I heard growing up were more factual than emotional, illustrated with artifacts left behind as soldiers criss-crossed the family farms—a sword, canteens, canon balls, even a piece of hardtack (a hard, flat cracker soldiers ate during the Civil War).

My husband’s experience was very different. The South had lost the war, after all. As he was growing up, his family lived in south Florida, hundreds of miles from where any battles had taken place. He heard stories about what happened to the South after the Civil War—how those evil Yankee Northerners came down and occupied their land. In fact, the period after the war known as the “Reconstruction” in the North had a different name in the South. It was called the “Occupation.” In school he learned that the South won all the battles, but lost the war. That the Northern soldiers had burned cities and crops and had gone after women and children. He says it was almost a joke that the Union soldiers ran away from the Rebel soldiers and went after civilians. The most egregious example was Sherman’s infamous March to the Sea, 150 years ago this month. 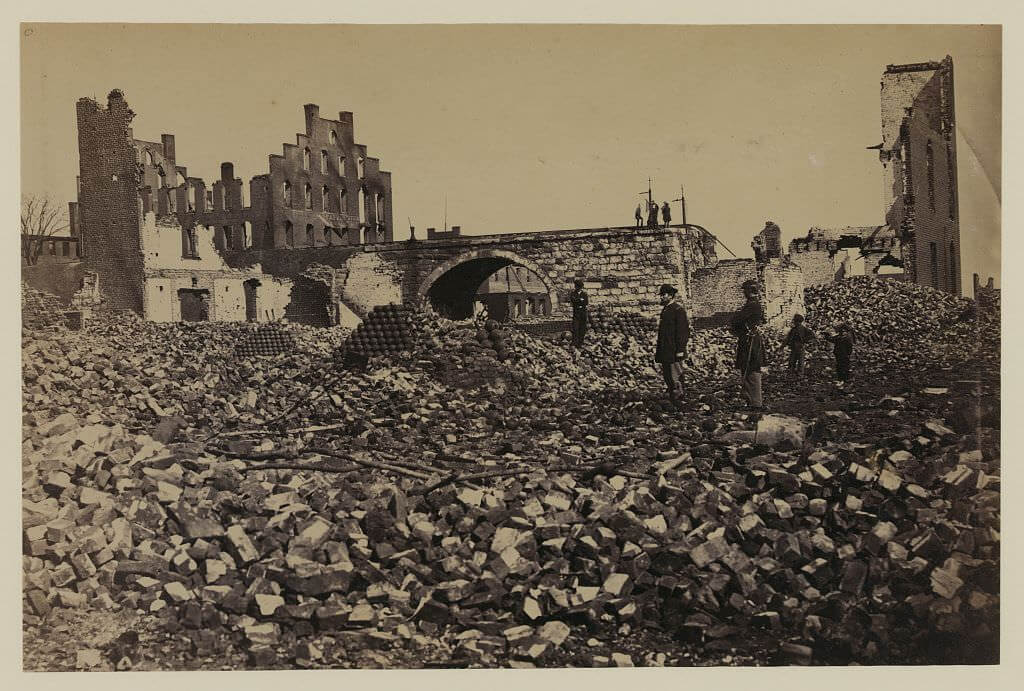 Then after the war, the eleven Confederate states were divided into military districts and occupied by Union soldiers. State and local governments were disbanded and new leaders were appointed by the occupying force, lands were taken and redistributed—some to former slaves, and the South lost its representation in Congress. It was forced to accept the Fourteenth and Fifteenth Constitutional Amendments giving voting rights to African-Americans. My husband says that his teachers lamented the fact that the Civil War was fought to prevent the South from seceding from the Union, but after the war it was difficult to get back in. Southerners had to earn their way back into the Union. They had to do what the occupying Yankees told them to.

Reconstruction v. Occupation. So it’s not only battles that can have different names—periods of history can too. It really is a matter of perspective.